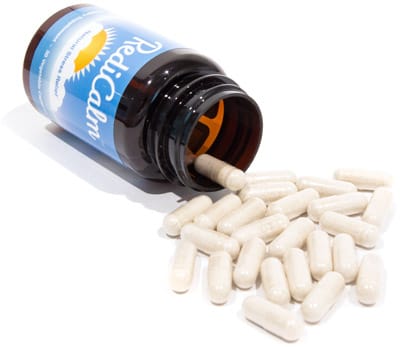 Note: The information on this page is not a substitute for professional medical advice. Please consult with your doctor before taking any new dietary supplement, including RediCalm.

RediCalm is a dietary supplement whose individual ingredients have a long-standing reputation of safety and effectiveness. RediCalm can be taken with most prescription and over-the-counter medications.

When taken as directed, RediCalm is safe and poses no short-term or long-term health risks. When taken as directed, RediCalm is not addictive or habit-forming. If you wish to stop taking RediCalm after taking the supplement daily for more than one month, we recommend that you gradually taper down your dose over 7-21 days. Although abrupt discontinuation is not unsafe, discontinuing gradually may reduce the likelihood of stress-related symptoms returning.

There are no reported harmful side effects associated with RediCalm. Most people that take RediCalm experience no side effects. If in the rare case side effects do occur, they tend to be mild and often disappear. Possible side effects include (as disclosed on WebMD's safety pages for each herb included in the RediCalm formula: (1) L-Theanine, (2) 5-HTP, (3) Ashwagandha, (4) Lemon Balm, and (5) Passion Flower:

Pregnant and nursing women should not take RediCalm (or any natural supplement) without the approval of a physician.

Do not exceed the recommended dose of four capsules at once or six capsules daily. Exceeding the maximum dose is not unsafe, although it may result in drowsiness or discomfort. Before taking RediCalm, talk your doctor if you are taking seizure medications, pain medications, muscle relaxants, other sleep or anxiety medications, or other medications that may cause drowsiness. RediCalm may increase the sedative effects of these drugs. Do not take RediCalm if you are currently taking an MAOI or have taken an MAOI within the past two weeks.

In general, RediCalm can be safely taken with prescription sedatives, including benzodiazepines such as Xanax® (alprazolam), Valium® (diazepam), and Ativan® (lorazepam). Keep in mind that RediCalm may increase the effects of sedative medications, although this interaction is not unsafe at recommended doses. If you are taking any type of sedative medication, use caution when driving or operating heavy machinery until you're familiar with the effects of RediCalm. If you are currently taking prescription medication, we advise that you talk to your doctor before taking RediCalm or any new supplement.

In general, RediCalm can be safely combined with prescription SSRI antidepressants, including Celexa® (citalopram), Lexapro® (escitalopram), Luvox® (fluvoxamine), Paxil® (paroxetine), Prozac® (fluoxetine), and Zoloft® (sertraline), as well as non-SSRI reuptake inhibitors such as Effexor® (venlafaxine) and Wellbutrin® (bupropion). RediCalm should not be combined with MAO inhibitors. If you are currently taking prescription medication, we advise that you talk to your doctor before taking RediCalm or any new supplement.

RediCalm will not reduce the effectiveness of birth control or interact with contraceptive medication. However, we advise that you talk to your doctor before taking RediCalm or any new supplement.

In general, it is safe to take RediCalm if you are also taking other vitamins or nutritional supplements. Of course, we always recommend talking with your doctor before taking any new supplements.